2006-06-16 to 2006-08-12.  Recalibration of the antenna Lock-To-Lock logic, addition of counter weights,  Work on the status page (stalled), purchase of a spectrum analyzer and O'Scope, Construction of a audio front end device and Client/Server nears completion.

From the previous entry (below) you can see that I'm having trouble with my antenna and possibly the feed horn. This is one of those things that doesn't become apparent until you do a close in look at your equipment. That's what happened when I built the Raster Scan software and turned it loose on my system - I found problems.

Ed Cole suggested that I re-look at the way the antenna system is constructed and I agree. Its has to be a mechanical problem. My old college professor once. told us that "All problems are mechanical. Never in the history of the earth has an electron failed to go where it was suppose to").

With that in mind here are the dimensions.

I would like to see what the antenna gain pattern looks like. I have all the tools (I think). I can move the antenna in a raster pattern. I can collect the maximum signal after the FFT and after integration and I can present the results in chart format. The results shows the decided drop in amplitude at about 175 degrees Az. No idea why.

This is much lower than the gain calculated from the dimensions of the antenna itself (32 dBi ) and much broader. The half power point looks to be about 40 degrees where it should be 3.37 degrees.

I need to find a signal that is clearly in the far field of the antenna. That may be the problem.

The GPS signals are all very loud and would make good targets except that they are right at the extremes of my antenna movement, so I can't raster scan past them. I did find a nice carrier at 1669,098,700 Hz at 220 deg Az and 50 deg El that seems to work OK. I'm collecting data on it now with 10 seconds of integration.

This is the result of the scan. I'll make another pass for consistency.

I looked up the Specs on the horn (from RAS) and the calculations I made on it using the SETI League's spreadsheet and it came up with:

So I guess that could account for the very long slope on both sides of the peak and the otherwise crummy look of it.

It does show a notch in the peak that seems to be on all the other in-band scans.

I still need to find some sort of signal within my band pass filter (1375 MHz to 1450 MHz), within the movement limits of my rotor and high enough (but not too high) to eliminate ground effects

This is the GPS signal today at 2 Pm. Looks better but still a huge notch.

I get about 14 dB gain on this curve but its still about 15 degrees wide.

I am not being very disciplined in my data collection. The trouble is with 12 million places to look its hard not to say 'well this place is just as good as any other' and start listening there. What happens is that I start finding the same signal more than once and sending alarm emails for the same signal a second time. I need some self imposed discipline.

So I wrote a database module that will automatically be updated each time a new hit comes into the system. Since I can order the database columns by frequency or Dec/Ra or Az/El I can see when I'm looking where I have been looking before.

The database uses a comma delimited text file rather than full blown SQL database only because I think a simple job, like this one, is quickly overwhelmed by a massive database engine. So far there is only one entry in the database (last nights hit) but when it get to some substantial size I'll find a way to automatically post it on the web site.

2007-05-22 I have the database working now with a few of the fine points remaining to fix. One is that the DateTime saved in the file does not sort correctly for some reason.

Good question Daniel.
The logic is a little obtuse but here it is.
When I'm looking at a specific point in the sky I see all kinds of lines caused by signals. Most of these lines are from local interference and some are from satellites going overhead. The local signals create lines that run straight top to bottom in the waterfall display (the jpg). The satellite signals may produce straight lines if the satellite is stationary and in the Clark belt or it may have Doppler, and cause a line that is not straight up and down, if it is moving toward my antenna or away from it. Of course these signals are not what I'm interested in.
I'm looking for signals that produce lines that move to the left in the jpg, lower in frequency. How fast they move to the left is very important because if they are from an ET they will move at a rate caused by the earths rotation. That's key. Since we know exactly how fast the earth is rotating (360 degrees in 24 hrs) we know how fast the ET signal should move down in frequency. How to make these 'ET signals' stand out against the background of all the other signals. That's the question.
What I do is to 'chirp' my receiver down frequency at the same rate as the Doppler expected from the earths rotation. The end result is that a signal from ET will be vertical and all the rest will move either to the left (faster than the earths Doppler) or to the right (slower than the earths Doppler).
My detection system sums all the signals in each vertical column (Bin) and averages them It then examines each average to see if it is larger than its nearest 5 neighbors. If it is it rings the alarm and sends you an email.
When the alarm goes off I step in and increase the resolution of my system so that I can see smaller changes in the line that caused the alarm to go off.
So the 'Chirp' is how much I'm changing my receiver and when I say 'No Doppler" it means that the signal under investigation is not staying in its bins enough to trip the alarm at higher resolution. I guess I really should say "Not the right amount of Doppler".

Actually its a little more complex than that. The calculated 'Chirp' needed is in fractions of a Hz/second (about 0.13) depending on where the antenna is pointed; so I really should be chirping my receiver by the same amount - every second change the dial by 0.13 Hz. Unfortunately my receiver cannot be commanded to tune in that small an increment. One hundred Hz at a time is the smallest. So what to do?

I keep track of the needed chirp and when it exceeds the width of one bin (1.34Hz wide at the maximum resolution) I bin shift UP one position which has the effect of moving the signal DOWN one bin in the waterfall. When the needed chirp finally exceeds 100 Hz my software then changes the receiver down one click, resets the bin shift and starts all over again.

With this system in place a signal that matches the earth caused Doppler and manages not to wobble around more than 1.34 Hz during the creation of one jpg will sound the alarm. This has never happened yet. Lots of alarms at 10 Hz/Bin but none at 1.3 Hz/Bin.

Its not perfect but it does seem to work.

I have decided that I want to characterize the antenna and horn better. What I would like to do is build a utility that will command the antenna Az/El to make a raster sweep over a known signal. This is a thinking out loud list of stuff I want it to do. 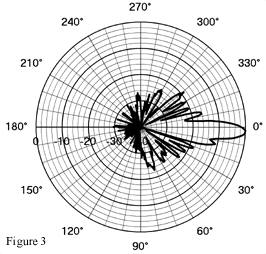 Example of Front to Back ratio Smith Chart

I guess I'll have to work with a simple X,Y plot for this.

I finally have the chirp and alarm system smoothed out now. Here is how it works. 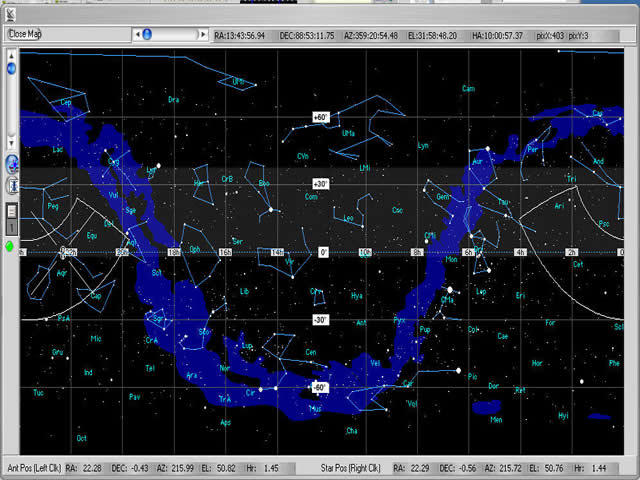 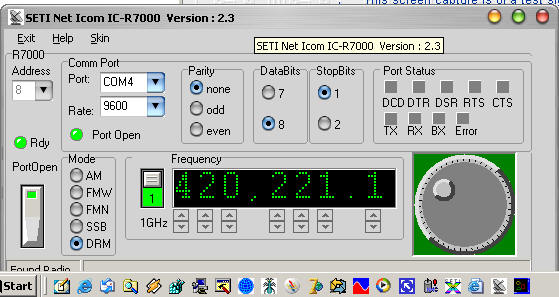 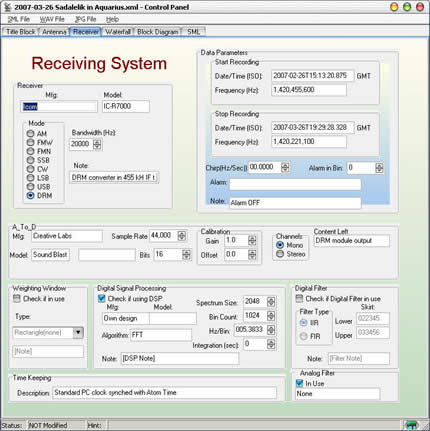 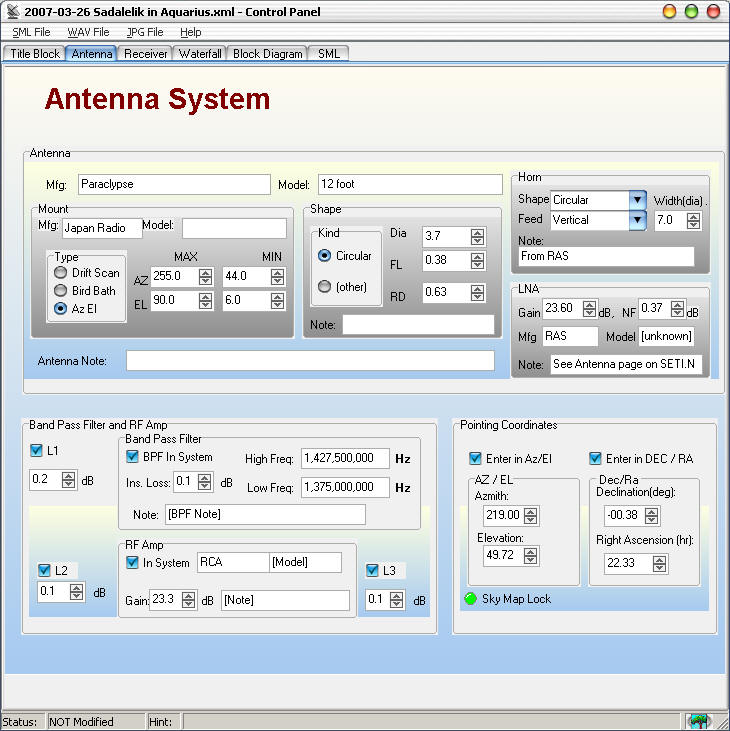 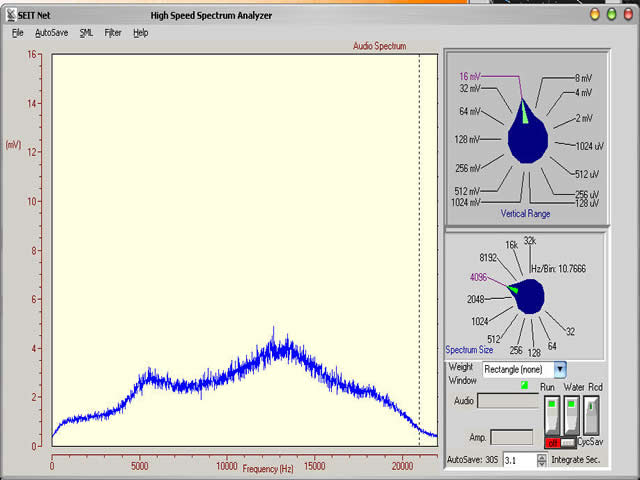 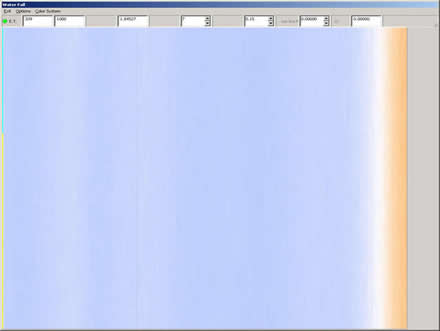 This screen capture is of a test signal injected into the audio output of the receiver. The small 'pip' between the two green lines is a Hit. I used the green cursors to highlight the position of the hit. 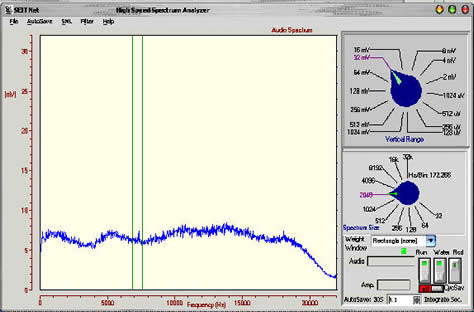 As you can see from the status line at the top of the waterfall this signal segment size is 7. So the bin with the signal is 15% larger than the seven bins below and the seven bins above it. When the first hit is detected any other matches in that frame are ignored.