I have the chirp working now. The software was back checked against the chirp spread sheet available on the SETI League website. It appears that the average chirp at 1420.000,000 is about 0.12 Hz/sec. Because the Icom R7000 receiver minimum tuning is 100 Hz it takes about 14 minutes for the receiver to move one notch. I ran the system against the RA 18 carrier I found and I could see it change the waterfall when the frequency changed. It's not much but it does work.

I have been troubled that the Paraclipse antenna will not reach the target Azimuth location with any better accuracy than about 4 degrees. After reading the Kerr documentation closely I realized that the Azimuth rotor motor was reaching the edge dead band and stopping. The dead band is the point in the pulse width modulation where the motor cannot move the antenna. For example; if the antenna moves fine at 10% PWM it may stop moving at 5% PWM. The drive has a Dead Band Compensation function that I had set to 1. Changing this to 128 made the antenna move to the target but then the motor was left 'humming' - trying to move to some new small target. I changed down to 32 but then the error returned. Now it is set at 50 and seems to solve the problem.

Marko pointed out that I must have done the IIR filter on its side (average across the buffer rather than from the last sample) and he was right ( Bad engineer, Bad engineer - now go sit in a corner) so I turned it around and it does work much better.

This picture was done with 'a' (FIIRa in the code) set to 0.02 and that does seem to be optimum. I like the way the waterfall 'slides' into the average.

I have collected ten different jpgs from the output of the IIR averaging suggested. Each one is marked with the value of 'a' in the formula. Each jpg also shows the result with and without the IIR (I turned off the IIR about 1/2 through the collection). Results below.

The integration question needs to be answered first since it seems to be the most difficult. Here is the problem:

The basic layout is shown below

I would like any source to fill its bins and not 'slop' over because I integrated to long and Doppler pushed its frequency up or down. It seems like a source width should be assumed to be about 10 Hz. I can (and will) put Doppler chirp on the receiver frequency.

My beam width is about 3 degrees at 1420 mHz. I can track most points for about an hour.

I know there are a lot of variables but some help would be appreciated. Any ides?

Now that the bulk of the SETI software is working to my satisfaction its time to make a To Do list for the remainder of the development.

I did collect data at RA 00 for SETI@Home candidate SHGb00+12a. Its in the archive but nothing interesting.

I thought I would add the five stars selected by Margaret Turnbull - Carnegie Institution, to the web site just to keep them on record. These could be a set of candidate searches as well as the SETI@Home Best Gaussians

After a lot of thrashing around I finally solved the problem (Item 108). It turned out that I had a software bug that was addressing the elevation servo and causing it to not move down. Now fixed and I am back to the study of the RA 18 line that I have found.

A quick test this morning and this carrier was discarded as ET.

I had decided that I would get around the problem of new/old Kerr module on the elevation motor by simply using an old module for elevation and a new one for azimuth. That worked fine for controlling the filter but uncovered a different problem. Now I cannot set the motor servo to zero for elevation. This is because the old modules do not allow that function. So I solved one problem and created another. An old story.

So now I think I will go with another idea that I had. I will replace the elevation module with a new version - that will solve the reset to zero problem, and then add a third module, old version, to the system to control the filter. I'll work on this today.

I have *placed* the new module in the control box, connected it up and am now testing it. It is the one on the far left in this picture. It seems to work so far. 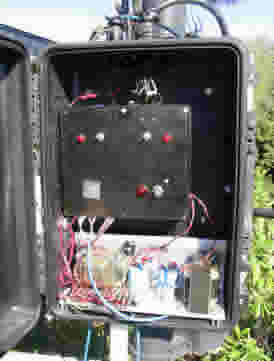 Tonight I looked back at SHGb17+09a (see the RA 17 Archive) but moved the antenna into RA 18 I found the line again at the maximum azimuth and elevation of my antenna. I did collect 45 meg worth of WAV and some nice jpgs. Still looking at this line and requesting help from Argus stations in analysis.

The principal criteria will be that the candidate cannot be higher than 20 degrees DEC, must be inside the frequency range of my Band Pass Filter, away from local structures (my neighbor's pine tree etc) and not near a system bird.

Because of the pointing and frequency uncertainties these candidates are really "in the vicinity of" rather than the candidate itself. Still in all you have to start somewhere.

So this is how I'll proceed: 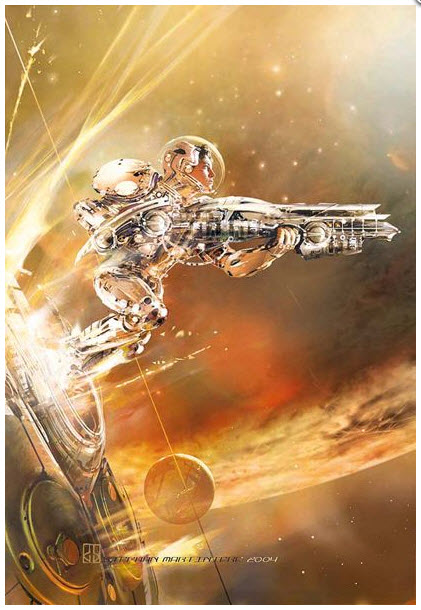