I need an Alpha tester to help me. That person will work with me on shaking out the bugs in the SETI Net client/server software. Requirements are:

The Alpha tester selected will download the current Client software and simply run it on his computer. When something doesn't run right or is not understandable email the SETI Net mail list with the specifics. I will make the changes and post a new release. We will use the mail list so that other users can view the process and comment on it as we go. Its as simple as that.

If you think you are the one for this task post on the SETI Net Mail list. I will set up a Master Client account for you and we will get started.

2006-05-21 Designing out loud - I am attempting to design the software that will control the antenna position graphically - the Sky Map. It has been in the Remote Client software for a while but has never worked correctly. This is what Antenna and Sky Map need to do on each refresh time tick..

Each tick the Antenna Refresh Process will

Scan Switch= Off - This is the initial condition.

2006-05-18 Still working on changes to the Client/Server software. I now have the 3kH/18kH switch sorted out but ran into a lot of other issues that have to be worked off one at a time. Stay tuned.

I will be running some test on the software for further changes. One of the first things will be the addition of a switch on the front panel of the client receiver to select between 3 kHz and 18 kHz audio stream.

I also need to build a better set of audio cables between the Icom receiver and the sound board on the remote server.

jpg of the Sound Layout for SETI Net

2006-05-11 Rotor repaired again. I found a broken connection in the Az position encoder electronics and once fixed the system seems to work.

2006-04-29 - The antenna and rotor is coming down from the pole (see the picture on the front page). I did get a quote from EGIS but is was 1,200 EURO for the rotor alone. That is way to much so I am looking for a used version or some other solution.

Antenna Down for Rotor Repairs

I got the antenna and rotor down once again with only a few minor scratches (to me not the antenna) and have the rotor down in the shop for work. The front picture shows the Jin pole still up and ready for replacement of the rotor and antenna. It looks bent because the camera is twisted a bit.

The main rotor is old, broken (again) and needs to be replaced. Its been on the pole for nearly 20 years now and has suffered much - I cannot keep it running any longer. A long Google session turned up a company in Germany, EGIS that sells the same rotor with a modern design. I am in contact with them to see if a replacement can be purchased. 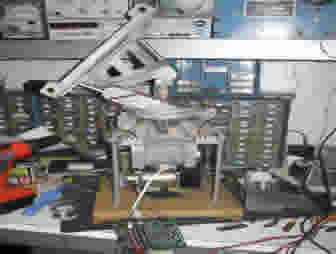 I now have the basic part of the streaming software running and am working it into the Remote SETI Server software. Stay tuned.

Working on the audio streaming software for the Remote SETI System. This is turning out to be more difficult than I thought.

I have the antenna running again and now am casting about for the next direction to take. Rather than use any of the commercial supplies that I found I decided to build one myself. This is a +36, +16 + 5 Volt system to run the rotor motors and associated logic.

I managed to get the power supply installed and running but not without blowing out my two new Kerr modules (damn). Just as I was installing the last module I dropped a test probe across the 110 VAC coming into the control box with predictable results (lightning flash, swearing, *really* bad smell, etc). I have new chips on the way but managed to get two of the older modules running in the mean time.

The power supply seems to work better than the old switching system I had before with the added advantage that I can repair it when it blows out.

2006-03-02 I received the two modules from Jeffrey Kerr and installed them without problem. Along the way I realized that my 24 VDC switcher power supply, for the elevation rotor motor, was folding back to about 10 VDC when asked to move the dish. This accounts for the slow elevation movement that I have noticed lately. The fix is to replace the power supply. I don't know about you but I find that switcher power supplies are a pain. They are always crapping out. It's not that they are electrically noisy, that problem seems to have been designed out with proper shielding and grounding, it's simply that they fail way to often. I am going to move to simple linear regulated supplies. I found and bought several power supplies from a local surplus house today and will attempt to find a combination that will run the rotor. Stay tuned.

I have been having a problem with the antenna control system. It has two of these modules , one for Az the other for El. They both hang from an RS-485 bus and turn on the rotor motor when commanded from the control computer and count motor revolutions and report back the change in degrees.

Lately they have been throwing off checksum errors for no reason the I can figure out. I have brought them both down to the shop and hooked them to a local RS-485 bus and they do error out once in a while. I have 'scoped them till I'm blue in the face and cannot seem to find the problem. When they work - they work well; when they fail the fail miserably. 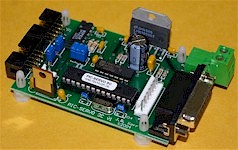 The new modules are a different design but should work for my system. I also ordered a stoc 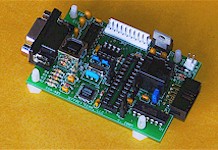 k RS-232 to RS-485 converter to eliminate that as a possible problem child. Hopefully this will clear up the instability of the rotor servos.

Now that the receiver is back running I can go ahead with other problems. I found a few new bugs in the R7000 driver software and released them. I moved the antenna control software away from an OLE architecture and to a simple Delphi unit. This is mostly complete and is released. Now its back to the Client/Server stuff (from the To Do list below). Currently I am working on the audio stream again. The server side is still un-incorporated into the server application and should be for consistency and startup flow.

Don Latham from the SETI League pointed out that C135 could be leaking and would slowly bias up the op amp. I have simply broken out the cap and will replace it from the top so that I don't have to remove the IF board itself. Stay Tuned.

2006-01-17 - A problem has crept into my receiver (ICOM R7000). What happens is that in SSB mode the audio will die off. It will restore itself as soon as I power off and then back on but after about 3 min. it dies again.

I have tracked the problem down to a notch filter on the IF board. The schematic is below. I find that if I simply touch pin 5 on the op amp the circuit will start operating correctly but then will die again after about 3 min. I cannot figure out why that should be. I could replace the Op Amp but its hard to get to and I'm afraid that I might cause more problems getting to it. I have simply heated the pins on the op amp with my iron but that didn't help either. One thing that bothers me is the fact the amp has +8.9V on the positive rail but -7 on the lower rail. I'm not sure if this could be the problem or a red herring.

I love the start of each new year. It allows me to ignore the failures of the past and plunge into the next year with the erroneous idea that everything is going to turn out great. I always start with a to do list.