2005-08-24 to 2005-10-05.  This chapter deals with the completion of a major repair on the antenna rotor (damn tooth), the installation of limit switches, the encoder schematic, Optical encoder schematic and the Red release of the Client/Server software

2005-10-14 I actually got the thing to move. I put in a complete set of limit switches, both Az and El, that signal the computer when the limit is reached and also shut off motor power if that is overrun. 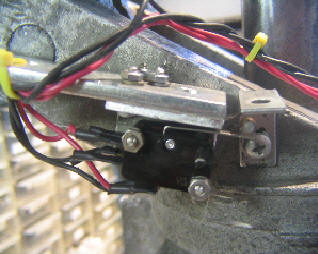 I had to mount the new motor a bit differently so I had to construct a new motor mounting plate. The needed to be plate steel, to handle the load, and required a lot of heavy work to get it right. 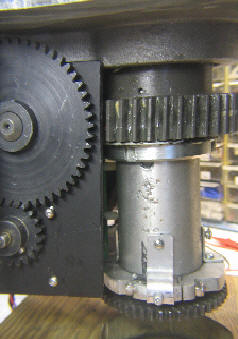 I had to rewire the control box, to allow for different motor voltages for Az and El and to clean up a couple of other areas. I also replaced the power supply in the control box (bottom module in the picture) and rewired some of the control logic in the upper section (shown with its door open). 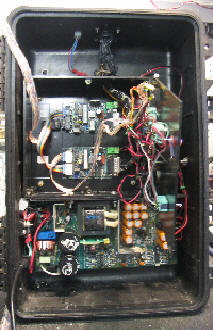 Bottom line is that the antenna again works but is *very* fragile. There is something wrong is one portion of the Az movement that causes it trouble making a smooth transition from about 20 degrees to 50 degrees, and it is also very slow to move. All these things can be lived with but the next break will be its last. It just cannot go on being patched this way...

2005-10-06 I was about to give up on the rotor but I thought I'd give it one more go. Glad I did. I found that using a large supply the Az motor ran about right at 12 VDC but the El motor required about +24 VDC. I can accommodate that but it will require some rewiring in the control box. I have the rotor down, once again, and am working on testing both motors and doing the rewiring. Stay tuned...

2005-10-01 I am about to test the new Az rotor motor. In case you have forgotten I burned out the Az rotor motor that had been working fine for almost 20 years. My software let one of the remote users crash the rotor against the mechanical stop and a couple of gear teeth were broken. No way to replace the gears, no way to replace the motor with the same type and the only chance was to find a 'similar' gear motor.

After buying about 12 different motors on EBay I did find one that might work. It had a 12.5 : 1 gear motor rather than the 25:1 on the original and was a bit larger. It also did not have an encoder on it.

The first step was to remove the working encoder from the original motor and adapt it to the new one.

I had to reverse engineer the encoder printed circuit card as well to make sure it would work. I think HA and HB are Hall effect detectors. They are the two little, unmarked, four terminal black IC's on the circuit board. Anyone know anything about them?

Then I had to build a mounting plate for the new motor, of course the mounting screw holes didn't match. The plate was made from plate steel and was harder than heck to work with. I had to go out and buy a abrasive wheel for my table saw to get through it

During the reassembly process I realized that I had put one of the El thrust bearings on backwards. That accounts for all that up/down banging around I saw when the antenna was working. I am now to the point of pulling the whole thing up the pole again for a test.

After lifting the rotor to the top of the pole and connecting it I find that the new Az motor is *very* fast. This not necessarily a good thing for the type of work I need it to do. I wish I could have found a 25:1 or 30:1 gearhead but I didn't so I have to work with what I have. Next step is to lift the antenna to the top of the rotor and see it the Az motor can move it with this low gear ratio.

AND THE ANSWER IS:

Nope - the rotor simply cannot move the antenna with that low of a gear ratio. If I give it a push it takes off like mad but it simply cannot start moving by itself.

BUT WAIT - I wanted to see just how much power it would take to get the Az motor to turn the antenna so I ripped out and bought a used(very used) 36 Volt 15 Amp Herkimer of a power supply. I connected it directly to the motor and ... it moved...

More investigation tomorrow but it could be that the 36 volt supply I was using was going into limiting at a very low current. If that's the case I can use a larger supply so long as the H Bridge amplifiers in the motor control logic will take that amount of power. They are rated at 46 VDC at 3 amp so I still have a chance.

2005-09-09 The red release seems to work although watching David Ocame use it has uncovered several problems (these are mostly reminders for me - my ToDo list).

I'll add to this list as other people play with it. In the mean time I'm going to see if any of the latest batch of YAMs have any promise...

2005-09-09 I have the RED release of the available for download now. This one has full control over the antenna (still in simulation mode until I can get a motor ) and of the getRecFreq and setRecFreq functions. You can send personalized messages to me and the computer will beep at me but it may take a while for a response.

The Master Client function is now limited to registered Argus stations. Guests can watch the antenna movement, the Star Map, and can listen to the radio but only an Argus station can move the antenna or change the receiver settings.

I received a new batch of Yams today (5 identical - they were a bargain) and while you are playing with the Remote SETI system I'll be working on the rotor again.

2005-09-06 Still waiting for then next set of YAMs and working on a new version of the Remote SETI Client/Server. This one will clean up the login process and will allow Master Client status to be obtained ONLY by Argus stations. Guest users can listen to the receiver and watch the antenna move but cannot control the station. I should have this release ready sometime this week.

2005-08-26 While waiting for a new YAM I have made some changes to the Remote SETI Client (and the server). I have switched to UDP from TCP to transport the audio from the receiver. Since its not really to important that the packets all arrive in order or even if a few are missed in the audio stream, UDP should be faster. UDP doesn't do retries when a packet is missed so there should be less drop-outs in the audio stream. Down load the latest client and give it a try please.

2005-08-24 I decided to tear the rotor right down the last screw and rebuild it. So that I can remember the order I like to take pictures as I go.

First the tear down:

Now I'm wait for a YAM (Yet Another Motor) to be delivered so that I can replace the Az gearhead motor.